The Supervisor of Accountants and the Great Gray Wolf 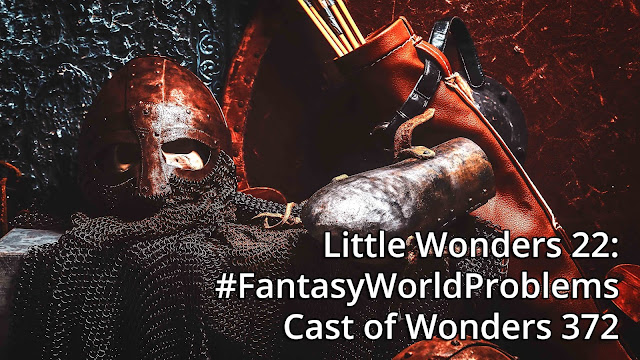 This story is now out at Cast of Wonders Episode 372. Sometimes the unlikeliest people are called to be heroes. But what sort of heroism can one expect of a lowly administrator?

I was asked today where I got the idea from. As I always tell people, ideas are easy, it's the execution that's hard. I keep a list of ideas to write stories from. They come from all over. When I read a story or book or see a movie or television show, and wonder, "Why didn't the characters do this instead?" (This doesn't mean I rewrite the story with that change--it means I write a story where characters face a similar problem and try my solution.) When I have a philosophical, political, or religious idea, and I think it would be interesting to explore it in a story. When there's some technology that might have interesting implications. When I see something happen in real life or hear about it on the news and think that it may have story resonance. When I dream something. Sometimes just when I come up with a really good punchline. All of these get written down to be mulled over, to build into a robust system and then broken in the story that tells how they fail.

But sometimes I look over that list, and find that I'm just not ready to write any of those stories. It's too ambitious, or the idea's not fully formed, or maybe it wasn't such a great idea anyway. In that case, I start brainstorming. This is when worlds I've created and novels I've written but never published come in. I start thinking about other stories I can tell in those worlds, bits of backstory I can fill in for those characters, sequels and prequels to unpublished, sometimes even unwritten, stories.

And when that doesn't work, I try something crazy. In this case, I decided to come up with a wildly original title, and after that, the story would practically write itself. But it turns out that wildly original titles are hard to write too. I realized my best bet was to avoid cliché or common words, so I went to dictionary.com, and started working my way backwards through its words of the day, trying to figure out if any of the words, or better yet, combination of words, sparked something. I discarded puissant (actually sort of cliché in fantasy), selenotropism, metanoia, and complaisant. But two words stuck out at me, especially when I put them together: "doughty" and "panjandrum". And thus "The Doughty Panjandrum" became the working title of my story, and figuring out what such a person would be like gave me the story's voice.

So it turns out looking up random uncommon words and combining them into a title does work as a method to come up with a great story idea. Who knew?
Posted by Donald S. Crankshaw at 9/11/2019 09:57:00 PM

Email ThisBlogThis!Share to TwitterShare to FacebookShare to Pinterest
Labels: Writing