It seems that all I talk about recently is Mysterion. Well, let's get back to the other thing this blog does these days: geeking out about tech.

I've been thinking recently about getting a new tablet. Currently, the only tablet I have is a 7" Amazon Fire. Which is great for consuming content, but I was thinking it was time for something with a little more meat. I don't intend for this to be a primary productivity device for me. I have a laptop for that, which I'm quite fond of. So the tablet would still be a media consumption device. But I would like it to be at least a little bit more capable of productivity. I now have an official work laptop (a Mac Powerbook that I'm not crazy about--but that's because I have a bias against Macs), and I don't feel like I can take two laptops to the office. But I often miss having my personal laptop when I have to stay late or I'm traveling and want to do personal stuff, such as writing. You can get keyboards with plenty of tablet devices, so that seems like it could be the way to go. I also would like something I could get LTE access with, so I'm not always tethered to WiFi.

I was thinking of getting the Samsung Galaxy Tab S2, but my cellular provider just stopped offering it, and I'm not sure I can get the cellular version anywhere else. And then I saw this:

That is the Lenovo Yoga Book. It's internals are nothing to write home about: Atom x5 processor, 4 GB RAM, 64 GB storage. The screen is 1920x1200 LCD (I really want an OLED screen, but that's not available). Fortunately, it does allow you to add microSD storage up to 128 GB, and it apparently does have  LTE. What's really interesting is that it has a keyboard--sort of. Its Halo keyboard is actually a touchpad with haptic feedback. I'm not sure how easy it would be for me to type on, so I wouldn't want to use this for my primary productivity device, but it could be good enough for those times when I want to spend a little time writing.

What's most interesting is that the touch keyboard transforms into a writing surface, like a Wacom tablet, that records what you write or draw. I'm not much of an artist myself, but I do like paper notes.

It also comes with the option of either Android or Windows 10. I like Windows 10, or at least prefer it over Windows 8, but Android is better for media consumption, in my opinion. At the very least, Amazon allows you to download videos onto Android, not Windows. For productivity, the one thing I'd really miss with Android is that Scrivener is not available for it--yet. Scrivener is my primary writing tool, and I'd really like to be able to use it when I'm on the go. But the iOS version of Scrivener just released, and I know they've been working on the Android version, so I'm hoping that the Android version will be available some time in the next year.

Mysterion: Rediscovering the Mysteries of the Christian Faith was released yesterday, August 31st, and you can now buy the anthology as an ebook and paperback at Amazon, and as an ebook at iTunes, Barnes & Noble, and Kobo. The paperback is $16.99, the ebook $9.99.

We hope you enjoy it as much as we did. And once you read it, consider writing a review.

Here's how we describe our anthology:

The Christian faith is filled with mystery, from the Trinity and the Incarnation to the smaller mysteries found in some of the strange and unexplained passages of the Bible: Behemoth and Leviathan, nephilim and seraphim, heroes and giants and more. There is no reason for fiction engaging with Christianity to be more tidy and theologically precise than the faith itself.

Here you will find challenging fantasy, science fiction, and horror stories that wrestle with tough questions and refuse to provide easy answers or censored depictions of a broken world, characters whose deeds are as obscene as their words and people who meet bad ends—sometimes deserved and sometimes not. But there are also hope, grace, and redemption, though even they can burn like fire.

Join us as we rediscover the mysteries of the Christian faith.

"A fascinating look at Christianity through the prism of speculative fiction."

"The stories in Mysterion ranged from the dusty preachings of a devout Roomba to a meditation on empty houses in heaven. I thoroughly enjoyed them all. General readers will appreciate the anthology for its diverse, entertaining tales, while those who enjoy provocative questions of faith and morality will find the collection especially rewarding."

Mysterion is coming out on August 31st!

That's the day that it will be available for purchase in both paperback and ebook from Amazon amd other retailers.

Meanwhile, if you'd like to get it early, you can support us on Patreon. A $5 pledge will get you the ebook on July 29th, while $25 will get you both the ebook and the paperback, with free shipping, sent in early August. But you have to pledge by July 28th. After that, we'll be shutting down the Patreon campaign.

Email ThisBlogThis!Share to TwitterShare to FacebookShare to Pinterest
Labels: Mysterion 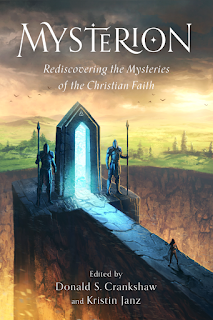 Kristin and I are pleased to announce the table of contents for Mysterion. You can find it on the Mysterion website here.

We're currently working on putting together all the pieces of the anthology, after which we'll send it to the copyeditor and then the layout artist.  We hope to have the anthology available for purchase by July. In the meantime, you can preorder a copy at our Patreon site.
Posted by Donald S. Crankshaw at 4/30/2016 11:45:00 PM No comments:

Email ThisBlogThis!Share to TwitterShare to FacebookShare to Pinterest
Labels: Mysterion

(Another) new story out: Marked Man

I've been busy on the anthology recently (we're in the process of editing the stories now, and it's taking a while), so I haven't had much to post here lately.

But in the meanwhile, I have a story out in Andromeda Spaceways Inflight Magazine #62. "Marked Man" is a weird western about what happens when the past catches up with you. The story comes with a cool piece of art in the magazine.


Heath knew the look of a man who meant to shoot another. There was no mistaking it in Eustace’s eye, so he drew his own weapon. No man could draw a gun faster than another could pull a trigger, though, even with the sort of help Heath had. The loud report of gunfire echoed off the buildings lining the street.

Another followed a second later, and Eustace went down. Itching burned across Heath’s chest, but he ignored both it and the wave of exhaustion that washed through him. He holstered his gun as he patted Murdoch. It was a good horse who didn’t shy during gunplay—or a deaf one. He hadn’t owned Murdoch long enough to be certain which he was.

As Heath dismounted, a flat disc of lead tumbled out of the folds of his shirt. He stooped to retrieve it from the dirt and deposited it in his pocket, forcing himself upright despite his trembling legs. It wouldn’t do for someone to find the disc and figure out what had happened. He checked again that his sleeves were all the way down and his shirt buttoned all the way up, just to be sure. He thought the Mark of Warding could take another shot or two, but it was best not to give anyone else a reason to shoot him.