As I mentioned the other day, Kristin and I did some ancient Roman cooking a week ago.  The great challenge in doing something like this is finding the ingredients.  Garum, a popular fish sauce in ancient Rome, isn't exactly available at the grocery store (although there's a reasonable substitute used in Vietnamese cooking).  We managed to make do there.  Harder to find was a substitute for defrutum, which is reduced grape must.  We had to go to a wine supply store to get something roughly equivalent.


For mussels: Garum, chopped leek, cumin, passum, savory, and wine. Dilute this mixture with water and cook the mussels in it.

(This is taken from the Nova website, which is quoting from the book we used.)

This brings us to the topic of this post, experimental archaeology.  Experimental archaeology is when modern scholars attempt to reproduce the work of previous generations, doing their best to follow their techniques.  This can include reproducing an Ancient Greek repeating ballista, running an Iron Age farm, or cooking a Roman meal.  There is of course a lot of variation in how rigorously this is done.  Our cooking, for example, used a lot of ingredient substitutions, along with modern kitchen appliances, following an interpretation of the Roman recipe.  So not very rigorous on our part.  The authors of the various cookbooks based on Roman recipes are, fortunately, better scholars.  They were the ones who did the actual experimental archaeology in order to turn the the recipes into something usable in a modern kitchen in the first place.

Another way that Kristin and I have taken part in experimental archaeology is in the medieval swordfighting lesson we took earlier this year.  Medieval swordsmanship is a lost art--no one's practiced it for hundreds of years.  The Eastern traditions fared better, as practitioners continued to pass down their fighting techniques, even after they had been surpassed by the gun on the battlefield.  However, European sword techniques have been preserved in one way: there are a number of surviving fight manuals, which display the techniques used in medieval swordsmanship.  They look something like this: 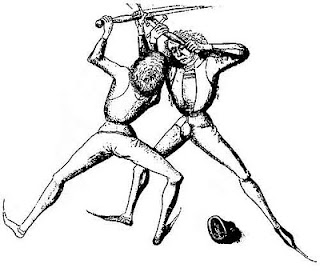 Usually, with a one or two word caption.  This, from Talhoffer (the most famous of the fight books), has the caption War-work.  ARMA (the Association for Renaissance Martial Arts) has lengthy excerpts available online.  Even with the complete fight book, it's hard to make out exactly what's going on in the images.  That's why experimental archaeology is so valuable.  It brings together all the manuals, with real swords, experience with related martial arts, and actual sparring, and attempts to reproduce the techniques which are only hinted at.


Aside from the exercise, why would anyone want to reproduce sword fighting techniques from the late Middle Ages?  Or, for that matter, recipes from the late Roman era?  It's partly a scholarly exercise, useful for archaeologists.  But I find it very helpful for a different reason.  As a writer of fantasy that draws inspiration from both Roman society and the Middle Ages, such experiments give me a better understanding of how the people of that time lived, allowing me to write with greater verisimilitude.

Email ThisBlogThis!Share to TwitterShare to FacebookShare to Pinterest
Labels: Archaeology