I mentioned about two weeks ago that I was considering buying a new smartphone.  Well, I went ahead and bought one the Friday a week ago.  I got the Moto X, which I mentioned as being the one I was most interested in.  The process was not entirely painless.  While the MotoMaker website was online, at that point, you couldn't just buy a phone from the website.  You first had to go to an AT&T store and purchase one of the scratch cards that gave you access to the website.  That took over an hour, since the AT&T employees didn't know how to do the order. It's not really the employees' fault, since they simply hadn't been trained on how to do it, but it was still frustrating for all involved.

But I finally got the card, and was able to get online and order the phone.  I really didn't want the customization option because I wanted a special color combination.  All I was really after was an extra 16 GB of storage, which is what I got.  As for colors, I just got a basic woven black, with metallic red trim. Then I placed my order and waited.  The website said that it would take 12 days to arrive rather than the four that Motorola has been promising in their press releases, but I guess they really meant four days, because the phone arrived on Wednesday, and I've been playing with it ever since.

What surprised me at first was how small the phone was.  I had seen the specs, so I knew its dimensions, but that's different from actually holding it in your hand.  I expected it to at least be bigger than my iPhone 4S, which is two years old, and has the dimensions of a three year old phone.  And it is bigger, but I've been carrying my iPhone in a Mophie Juice Pack Case, which makes it bigger. Big enough that the Moto X and the iPhone in its case were the exact same length and width, except that the Moto X was much thinner. In fact, it feels small and light compared to what I've been carrying around.  But it also has a 4.7" screen, as opposed to the 3.5" on the 4S.  So it's smaller in size, but has a bigger screen at the same time.

It doesn't have a longer battery life, but that's mainly because my 4S had the extra battery in its case.  I'm fairly certain that the 4S by itself doesn't last as long as the Moto X, which seems capable of running all day without recharging, from 7 am to 11 pm, although by 11 pm it's below 15% battery and on battery saver mode.   I use my phone pretty extensively during the day, though it's mostly for web browsing and checking e-mail and reading e-books, not for the real battery hogs, like video or games.

The screen's a large and beautiful AMOLED.  The difference in size is very noticeable.  I'm not so sure about the color and contrast, which are supposed to be really good on an AMOLED, but that may just be because I'm not enough of a screen connoisseur to be able to tell the difference without looking at them side by side.  Though certainly, Apple's been no slouch when it comes to high-resolution screens for their phones.  I do like that the Moto X takes advantage of the AMOLED screen to do low power, on screen notifications.  I'm getting used to just glancing at my phone and being able to tell whether there's anything I need to deal with, without having to press any buttons or unlock it.

Since this is my first Android phone, a lot of the differences I'm noticing are the differences between Android and iOS, and not specific for the Moto X.  For example, I miss having a number on the icons to tell me how many email messages or voicemail messages I've received, and having a list of all my e-mails in my notifications.  But I'm definitely enjoying the ability to control where my icons go, choosing which ones I want to be my favorites, and putting widgets on my home screens to keep me up to date without having to fire up a program.  Right now I have a widget for weather and time (which is huge, as shown in the screenshot, but I wanted to show the hourly prediction as well as the current weather), one which shows my Google Now cards (at least the first couple), and a work one to keep track of the time I spend on projects (this one is more limited than I would like, as it can stop, start, pause, and select projects, but it fires up the app whenever I stop a task to try to make me enter comments, even when I don't have any I want to record).

The Moto X comes with touchless control, which is voice control without the need to press any buttons.  I've found it pretty effective at activating when it's supposed to, but it chokes at my lock screen, and doesn't always recover after I've entered the lock--it sometimes keeps asking me to retry the voice entry, but if I press the retry button, it fails to give me enough time to do so. This would probably work better with no lock at all, or with a trusted Bluetooth device, which would cause it to unlock whenever it was paired with the trusted device.  I'd sort of like a smartwatch, but it may be another generation before they're actually useful.  $150 is kind of expensive for something that just keeps my Moto X unlocked when I'm nearby.

The phone came with a Skip, which is an NFC device that unlocks the phone.  I haven't really tried doing the voice thing with the Skip--I'm not sure whether it would work better or not, but I probably ought to give it a try.  I don't really find voice control that useful--I almost never used it on the iPhone, even though it Siri was a major selling point of the 4S.  However, I've found Google's voice recognition pretty good, especially when using it to dictate by pressing the microphone icon on the keyboard.  I'm just not sure how to use the voice control to do the things I'd really like to do with it.  Like get it to text my wife using Google Hangouts rather than Messenger, or play an audio book in Audibles.  I'm not sure whether that functionality will be built into it any time soon.

I am really enjoying the Swype keyboard (actually, I'm not sure whether it's officially Swype, the settings just call it gesture entry). If you're not familiar with it, this is an interface that lets you enter words with a gesture, sliding (or swiping) your finger along the touchscreen from letter to letter in order to complete words. This is much quicker than the hunt-and-peck typing I usually use on a cellphone screen.  I can type on a keyboard, but I really don't think about where the actual letters are located.  It's more a matter of knowing how to move my fingers for certain letter combinations (in fact, I'm not entirely certain that I type letter-by-letter so much as word-by-word, so that  I know how to move my fingers in order to get them to produce certain words). In any case, there's still a good bit of hunting to do on phone keyboard, and I have to actually seek out the letters.  The Swype interface is a lot faster though, and I occasionally find myself not recalling where a letter is in the middle of a word, since I simply don't have the same muscle memory as I do while typing.  I may develop it with practice, though, so I'm trying to do that.  The problem is that it hurts my wrist when I do it for any length of time, but hopefully that, too, will improve with practice.

So, overall, I'm enjoying both the Moto X and Android, though it's a bit difficult sometimes to tell which I'm actually enjoying.  But as long as the complete package is good, I suppose that's what I'm after. 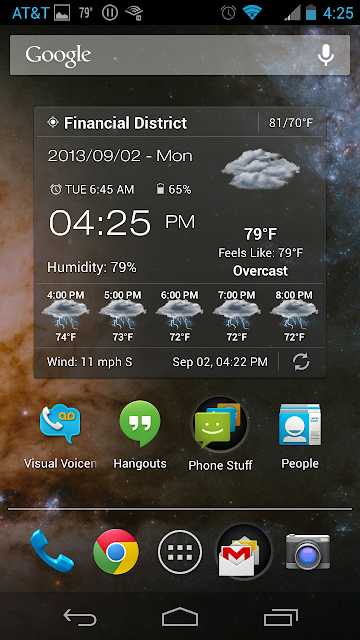