Naples: The city and Paestum

After spending two days in Pompeii and Herculaneum, we decided to spend the next day in Naples and see one of the castles.

The problem with seeing Naple's castles is that while you can see the courtyard, and some of the interior, you can't actually go up into the towers and the battlements, which is what I'd really like to see when I'm visiting a castle.  Instead, Naples seems to have turned all its castles into art museums, which seems to me to defeat the purpose of going to see a castle.  There were some interesting paintings, I admit, including one of the Visitation of the Magi, where one of the magi was clearly a midget.  There was also this door: 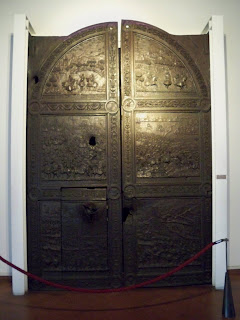 Which is most interesting for the cannonball embedded in it.  This is supposedly the door to the gate, but as the sign next to it notes, it's far too small to span the gate to the castle.  It may have been part of a larger structure spanning the gate, but I believe the sign suggests that it actually belongs to another castle.

The next day we went to the Naples National Archaeological Museum.  This is where many of the artifacts recovered from Pompeii and Herculaneum end up.  Once more, there seems to be an emphasis on the art rather than the archeology.  The museum mostly contained statues, mosaics, and pottery.  There were a few exhibits of everyday, household items.  These would have been the most interesting ones to Kristin and I, if any of the signage for that section was in English.  But they seemed to save their English for the more artistic items, like these: 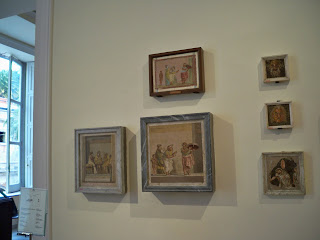 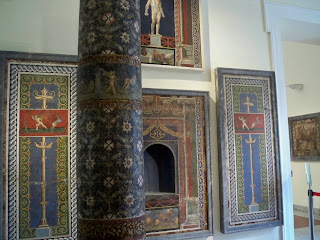 On our last day in Naples, we traveled to Paestum.  Getting there proved to be a chore, starting with a train to Sorento, and then a long bus ride to Paestum.  Getting back was easy though, as there was a direct train between Paestum and Naples, which would have made things much easier if we had known about it for the trip thre.

Paestum is the remains of a Roman colony, which was originally a Greek colony.  It has some of the oldest temples in Italy.

There's also a museum, which I thought was one of the better archeological museums, not least because it had English signs for everything.

After that it was time to return to Rome, and from there to Boston, because we'd seen all of Italy we could see in two weeks.