...happened two weeks ago.  Prince William married . . . some woman, I presume.  I really wasn't paying attention.  I was more concerned with the wedding of my lifetime, which happened this past Sunday, when I married the lovely and talented Kristin Janz.

Kristin and I met in the writing group of Park Street Church in April of 2009.  We quickly discovered that we were both published writers who wrote similar types of stories, specifically fantasy with a society based on Ancient Rome.  This became something more, thanks largely to generous hints dropped by Kristin.  Even so, it took me awhile to notice, but by July we were dating.  Aside from going to conferences together, we've also gone camping, backpacking, and to restaurants much nicer than I would ever think of going by myself.

After a year and a half, I proposed to her in December, while we were visitng her parents in Nova Scotia.  This gave me the opportunity to ask for her father's blessing first (note that I asked for his blessing, not his permission--it's an important distinction).  We didn't leave ourselves much time to plan for the wedding.  There are limits to the times her family can travel, so that meant that the wedding would either have to be before mid-May, or we'd have to wait until October, and we decided earlier was better than later.  Less planning time encouraged us to keep things simple, which was how we preferred it.

Kristin had long dreamed of having her wedding as part of the regular church service.  It's not unheard of, but it's not something that our church had done before, so when we approached Park Street's associate minister about doing it that way, he was originally reluctant.  We laid out our case in e-mail, and apparently the senior minister was enthusiastic about the idea, so eventually the associate minister came around.  We scheduled the wedding for the 6:30 pm service at Park Street on May 8th.

Ultimately, the wedding ceremony was the easy part.  There were, over the course of the weekend, no less than four parties, although I'm using the term "party" a bit loosely.

The first party was really just dinner out for us and our families on Friday night.  The twelve of us went out to Legal Seafood, one of the nicer family-friendly mid-range restaurants.  Present were Kristin's parents, her grandfather, her brother, and my parents, my sisters, and my nieces. 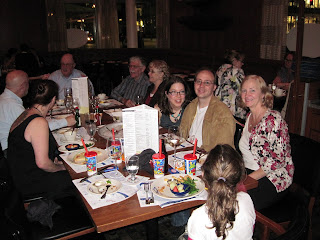 The next day was what we'd been calling "The Saturday Event."  Since the wedding ceremony was so late, the reception would be even later.  So we knew that we needed something at a time that families with children could enjoy.  We also wanted to spend more time with our families and other friends who'd come from out-of-town to see us.  For this purpose, we planned a party for Saturday afternoon, from noon to five.  This took place at our old apartments: prior to getting married, we lived in the upstairs and downstairs apartments of a two-family house.

For this, I wanted to do something special for the food, namely crawfish. Crawfish is a very Louisiana food, which you just don't see a lot up north.  For a while we didn't even know if we could get crawfish in Boston, but we discovered a restaurant called Brother's Crawfish, in Dorcester, that catered.  They delivered plenty of crawfish for our meal. 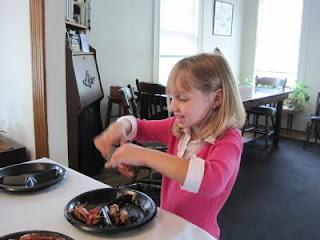 Aside from crawfish, we got some barbeque and sides from Blue Ribbon.  This ensured that even those who couldn't eat shellfish (like my sister) had plenty to eat. 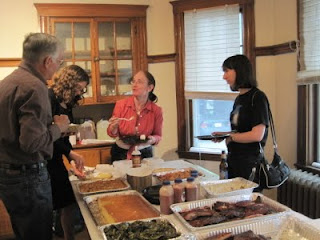 After we had cleaned up, Kristin and I went home to rest up for the big day.  And it was big.

The first order of business was getting set up for the reception, which would take place that evening in the same two apartments where the Saturday Event had been.  Then we picked up the food for the next party: coffee hour.  Our church has two evening services, a 4 pm service and a 6:30 pm service.  In between, they have a coffee hour.  Since our wedding was at the 6:30 pm service, we decided that we should be present there to greet guests who were coming to the wedding, but not the reception.  But since coffee hour usually only has a limited amount of food, we brought extra: a full gross of desserts from Quebrada.  We had cupcakes, croissants stuffed with fruit or chocolate, lemon tarts, fruit tarts, chocolate tarts, chocolate dipped strawberries, and five pounds of cookies.  We also brought some Italian sodas, apple cider, and some teas to drink.  We wanted to make the desserts available to the entire church, but we also knew that they'd go quickly, so we told our guests to come at 5:15 pm.  The 4 pm service let out at 5:20 pm.  By 5:30 pm, all the desserts were gone. 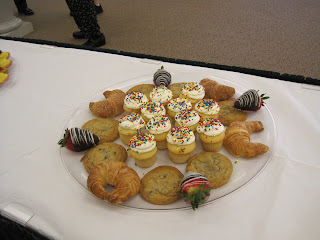 Nevertheless, we were able to talk to most people at the reception.


After that, it was time for the main event.  We had a reserved row for family, but everyone else found their own seats.

In order to keep the wedding from being too disruptive of the regular service, we kept things simple.  That meant no wedding party, just Kristin and I, no wedding dress, and no special music or readings.  When the time came, we went up, stated our intentions, received the blessing of our families and the congregation, said our vows, exchanged rings, kissed, and sat down.  Okay, sure, it sounds like a lot when written out like that, but the whole event only took about ten minutes.

After we had our receiving line--really, we just stood where new members stand after they join the church, and let people say hello and congratulate us--we went to the fourth and final party, the reception.  For this party, we had sushi from Whole Foods, as well as fruit, vegetable, tortilla, and mediterannean baskets.

While many of our guests with children weren't able to make it, we hung out with a lot of friends, some local and some from out-of-town.

Around midnight, we went home to our new place.  We didn't take any pictures of what happened next, though.